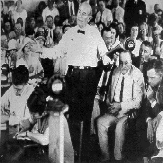 The Great Tennessee Monkey Trial. Adapted from the original trial transcripts by Peter Goodchild, starring Edward Asner, Charles Durning and Tyne Daly. The Scopes Trial, over the right to teach the theory of evolution in public schools, reaffirmed the principle of intellectual freedom as codified in the Bill of Rights. The trial, in a small-town Tennessee courtroom in 1925, set the stage for ongoing national debates over freedom of inquiry and the separation of church and state in a democratic society, debates that continue to this day.

Sense and Sensibility. By Jane Austen. The story revolves around Elinor and Marianne, two daughters of Mr. Dashwood by his second wife. They have a younger sister, Margaret, and an older half-brother named John. When their father dies, the family estate passes to John, and the Dashwood women are left in reduced circumstances. The story follows the Dashwood sisters to their new home, a cottage on a distant relative’s property, where they experience both romance and heartbreak. The contrast between the sisters’ characters is eventually resolved as they each find love and lasting happiness. Through the events in the novel, Elinor and Marianne find a balance between sense (or pure logic) and sensibility (or pure emotion) in life and love.

Take One Night. By Rachel Joyce. On the eve of their son’s 10th birthday, Alan and Alice start work assembling his present. The only instruction they can find simply says, ‘Take one night’.

Maud. (R) Joseph Millson reads Alfred Lord Tennyson’s 1855 dark and lyrical poem Maud to celebrate the 200th anniversary of the poet’s birth. A disturbed young man roams the windswept hills, haunted by his father’s suicide and his mother’s early death. He blames his father’s old friend, the lord of the Hall, for his ruin. The young man was betrothed to Maud, the lord’s daughter, when they were children, but she and her family left the area after the suicide. But now there are workmen up at the Hall – Maud has come home. 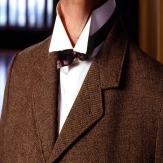 The Admirable Crichton. Adaptation of JM Barrie’s classic satire about the changing fortunes of Crichton, the perfect butler. Liberal aristocrat Lord Loam favours a return to nature, with masters and servants living together as equals, but Crichton is the perfect butler and the perfect snob who adores the intricacies of the class system. He cannot help but be horrified by his master’s opinions, and it will take a sea of change to alter them. 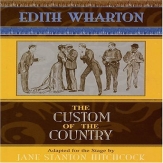 The Custom of the Country. By Edith Warton. The Spraggs, a family of Westerners from the fictional city of Apex who have made money through shady financial dealings, arrive in New York City at the prompting of their daughter Undine who is dissatisfied with their station. For a while Undine struggles to enter the top echelons of society. She finally succeeds at this by marrying Ralph Marvell, a member of an old upper-class New York family. Before her wedding, Undine encounters an acquaintance from Apex named Elmer Moffatt, and begs him not to do anything that will endanger her wedding to Ralph; Elmer agrees. 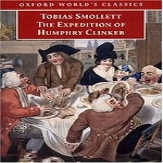 The Expedition of Humphrey Clinker. By Tobias Smollet. Humphry Clinker is an ostler, a stableman at an inn. He is taken on by Matthew Bramble and his family while they are travelling through England. Various adventures befall them, especially after their meeting with Lieutenant Lismahago, a Scotsman, who joins their party. After various romantic interludes, Humphry suffers false imprisonment but is rescued and returned to his sweetheart, the maid Winifred Jenkins. It is then discovered that Humphry is Mr. Bramble’s illegitimate son from a relationship with a barmaid during his wilder university days.

The House on the Borderland. (R) By William Hope. Two good friends go off to a remote village in rural Ireland. The two men – Mr. Tonnison and Mr. Berreggnog – soon discover that the people in the village are untalkative and secretive, but willing to help them on their way. They soon discover why this is. On the third day of their trip they travel in the opposite direction to the one that they had been travelling insofar, and stumble upon a large chasm with what appears to be the ruins of a very strangely shaped house in the middle of it. As they explore the house, they discover within a mouldering journal that describes the last days of the man who owned this house before it was destroyed. They go back to the camp and begin to read the strange tale of the man.

The Island With No Name. By Alison Joseph. Hebridean island life isn’t for everyone, yet when Kathleen decides to sell her family’s croft and head to Glasgow, her friends are appalled. Her decision becomes a catalyst that causes people in the small community to re-examine their heart’s desires.

The Secret Parts. By Eve Brook. When she finds the body of one of her colleagues lying in a council house corridor, councillor Helena Kerr has immediate suspicions about the identity of the murderer. She suspects her main political opponent. 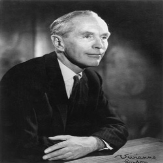 The Night They Tried to Kidnap the Prime Minister. Martin Jameson’s fictionalised account of the incident in 1964 when a group of students attempted to kidnap the then-Prime Minister, Sir Alec Douglas-Home, in Scotland.

The Recall Man. By David Napthine. Dr Joe Aston is a forensic psychologist, working in the controversial field of recovered memory, on attachment to the police in Teeside.

Series1
The Introductory Episode. Doctor Joe Aston Investigates. Grace Hayle and her boss were working alone – and now he is dead. She claims to have no memory of what happened, so an expert in memory recovery is brought in.scientist Grace Hayle and her boss were working alone in the laboratory. Now he’s dead and she’s the only suspect in a murder case. She claims to have no memory of what happened and there’s little evidence to go on. An expert in “recovered memory” attempts to uncover the truth.
Making Waves. The first of three new cases for psychologist Joe Aston as he continues his work with the police in Teeside. A diver suddenly remembers what he thinks was a murder. Joe must try to make sense of his confused memory of that night. When the case reaches court, they both face tough sessions in the witness box.
Over the Border. In Middlesbrough a small-time criminal lies dead in the passenger seat of a taxi. The police suspect the involvement of a criminal gang. Tommy Sheldon, the driver, is in severe shock and can remember nothing after his fare got into the taxi in Bishop Auckland. Despite the risks the police feel is involved, Joe Aston works with Tommy by retracing his journey from Bishop Auckland to Middlesbrough in the hope that his memory will begin to emerge. But perhaps this is an experience that Tommy would prefer not to remember?
Stepping Out. A spate of random attacks on women is baffling the police. When another psychologist, Beth Webster, claims to see a link between them, she is put on the case. So at a time when Joe Aston’s attachment to the force is up for review, he finds himself sharing an office with a rival. But when Joe does some recall work with DI Anne Reynolds, who has attended many of the scenes of the attacks, his thinking brings him into conflict with Beth. Which of the two ‘experts’ will be proved right?

The Right Royal Rip-Off. By Wally K Daly. Charles and George’s cosy lifestyle in B Block is threatened by the spectre of parole. So they plot to steal the Crown Jewels to stay jailed. 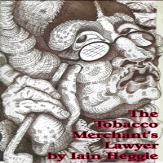 The Tobacco Merchants Lawyer. By Iain Heggie. Glasgow, 1780. Lawyer Enoch Dalmellington detests the corruption of Glasgow’s merchant princes, but can’t resist being bought off by them. That’s when he’s not busy being distracted by his daughter Euphemia, his sceptical housekeeper Widow McKay and her spiritual advisor, the startlingly prescient soothsayer Madam Zapata. 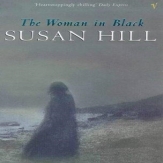 The Woman in Black. By Susan Hill. Young solicitor, Arthur Kipps is summoned to Crythin Gifford, a small market town on the east coast of the United Kingdom to attend to the funeral of Mrs Alice Drablow, an elderly widow who lived alone in the desolate and secluded Eel Marsh House. The house is situated on Nine Lives Causeway, and at high tide is completely cut off from the mainland with only the surrounding marshes and sea frets for company. Kipps soon realises there is more to Alice Drablow than he originally thought. At the funeral he spots a woman dressed in black and with a pale, wasted face, who is watched in silence by a group of children. Over the course of several days, while sorting through Mrs Drablow’s papers at Eel Marsh House, he endures an increasingly terrifying sequence of unexplained noises, chilling events and hauntings by the Woman in Black. The hauntings included the sound of a horse and cart in difficulty which were closely followed by the screams of a young child and his maid.

To Heaven by Water. (R) Bill Nighy reads from the novel by Justin Cartwright, about a family as they come to terms with the loss of a wife and mother. Now that his wife is dead and he has retired from his job as anchorman for a 24-hour news channel, David Cross is building a new life. But his children are uncomfortable with his new image.

Turning the Hut. By Nick Warburton. When Jimmy, a none too bright country boy, asks Clara to teach him to read, an unlikely relationship develops. But it is a friendship forged through fear. Jimmy longs for the love and acceptance of his step-father.

The Water Babies. By the Reverend Charles Kingsley. Written in 1862-1863 as a serial for Macmillan’s Magazine, it was first published in its entirety in 1863. The book was extremely popular during its day, and was a mainstay of children’s literature through the 1920s. Tom, a young chimney sweep, falls into a river after encountering an upper-class girl named Ellie and being chased out of her house. There he dies and is transformed into a “water baby”, as he is told by a caddis fly — an insect that sheds its skin — and begins his moral education. The story is thematically concerned with Christian redemption, though Kingsley also uses the book to argue that England treats its poor badly, and to question child labour, among other themes.

We Can Remember It For You Wholesale. By Phillip K. Dick. Douglas Quail, a simple and ordinary man, wishes to visit Mars. Unable to afford it, he visits a company, Rekal, Incorporated, that offers implanted memories (“extra-factual memory”). The attempt to implant some racy Mars memories of Quail as a secret agent reveals that Quail actually is an undercover government assassin with a mind full of dangerous secrets. The Rekal staff quickly get Quail out of their office; he heads home and finds certain physical evidence to support his new old memories. The government initially seeks his death but instead Quail manages to make a deal. He returns to Rekal to have his Mars memories once more suppressed, and is offered by way of compensation a set of heroic wish-fulfillment false memories. The Rekal staff begin the memory-implanting procedure — and uncover a different and older set of suppressed memories revealing that the unbelievable memories they are about to insert are already there and are true.

What Did I Say? By Mark Lawson. When Max Coleman is suspended from work for an allegedly offensive remark, he just can’t figure out what on earth he might have said.