Many thanks to Peter P and David W for contributions to this page.

Negative Signs of Progress. Three plays by Dan Rebellato. The Arab Spring uprisings that swept across the Middle East in 2011 are the subject of a trilogy of plays by Professor Dan Rebellato from Royal Holloway university. Professor Rebellato, Head of the Department of Drama and Theatre and an established playwright, was so moved by the pro-democracy rebellions, he was inspired to use the power of storytelling and comedy to explore how westerners, such as himself, interpreted the events.
The result is Negative Signs of Progress, a trilogy of plays, which are set in the developed and developing worlds against the background of the Arab Spring, draw on Professor Rebellato’s academic research on globalisation at Royal Holloway. The tone of each play is very different with the second, entitled There, using comedy to scrutinise our assumptions about the revolutions.

Negative Signs of Progress: Here. By Dan Rebellato. Danny is woken in the middle of the night by Paul, a security official, who tells him that his wife, Ellie, an aid worker, has disappeared. Initially upset, he is disturbed by questions which suggest that his wife is not who he thought she was. She’s not in the country she said she was in. In fact she is in Syria. She has been seen in the company of an ex lover, with murky business connections. Although angry, the evidence raises doubts in Danny’s mind. What does he really know about the woman he loves? And are the competing mindsets of the first, second and third worlds irreconcilable?
Negative Signs of Progress: There. By Dan Rebellato. A group of junior strategists grapple with the fictional situation that one of their field workers has disappeared and may have been kidnapped. Despite their near-total inexperience, they have to role play scenarios in which they negotiate with the unknown kidnapper, struggling to separate truth from fiction, Aleppo from Hollywood. But when they finally get to grips with the issues, and gain some understanding of the complexities of the situation, the phone rings..
Negative Signs of Progress: Somewhere. By Dan Rebellato. A frightened western hostage finds herself in a beautiful library, the unwilling guest of a man of impeccable civility. An extraordinary conversation unfolds as the play asks how far the west and the east can understand each other; whether the Arab Spring is a projection of western liberal wish-fulfilment; and, when the music of Debussy is used as an act of prisoner abuse, how easily civilization can become a vehicle for brutality. Identities, politics, borders and boundaries blend and shift in a perpetual hall of mirrors. By the end, there are no answers, just a display of genuine compassion and yet more questions.

When Marnie Was There. By Joan G Robinson, dramatized by Beaty Rubens. Anna is a solitary foster child sent away to a small Norfolk village one summer. She makes friends with a mysterious and significant girl called Marnie, and discovers a good deal about her past. 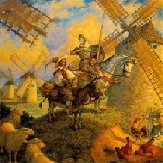 Don Quixote. By Miguel de Cervantes. Don Quixote tells the story of Alonso Quixano, a minor landowner who has read so many stories of chivalry that he descends into fantasy and becomes convinced he is a knight errant. Together with his companion Sancho Panza, the self-styled Don Quixote de la Mancha sets off to save Dulcinea del Toboso, an imaginary object of his courtly love crafted from a neighbouring farm girl by the illusion-struck “knight”.

Daniel Deronda. By George Elliot. Two intertwined tales united by the title character. Deronda was raised by a wealthy man, Sir Hugo Mallinger, but his relationship to the man is ambiguous–he is widely believed to be his illegitimate son though Sir Hugo never says so. He becomes attracted to the beautiful, arrogant and willful Gwendolen Harleth, whose family experiences a reversal of fortune shortly after the novel begins. In order to save herself from becoming an impoverished governess, Gwendolen marries the wealthy but depraved, cruel Henleigh Grandcourt, despite having promised his mistress (Lydia Glasher) she would not do so. 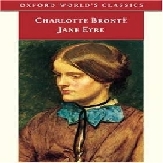 Jane Eyre. By Charlotte Bronte. Jane Eyre is the famous tale of an orphan, who must overcome seemingly overwhelming odds to survive. This Gothic novel ventures into the nature of love, religion, an awakening, an exploration of the place and treatment of women and children, and much more–all in the form of a vivid adventure as Jane Eyre finds her way.

‘Twas the Night before Christmas. Attributed to Clement Clarke Moore. It Never Happened: Working on Christmas Eve is no fun, especially when your eccentric boss is acting even more oddly than usual. 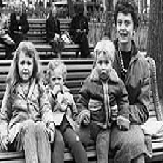 Mother Spy. By John Fletcher. Janet Chisholm was a British Embassy wife and mother in Moscow who was persuaded to use her young children and their trips to the park as cover in handling the Cold War’s most influential informant at the height of the Cuban Missile Crisis. His reports contained detailed information about Soviet nuclear capability and he was arrested, Chisholm fled Moscow, Britain was electrified.

Aliens From Cyberspace. By Gary Ogin. A comedy inspired by incredible – and totally untrue – events. Set in the glamorous world of Hollywood, it deals with the possibilities that the Internet now offers in helping people find true love. But have you ever wondered who you were chatting to? Or which planet they might be from?

The Dangers of Self-Hypnosis. By Gary Ogin. Maurice has problems dating. So he buys a self-hypnosis CD to explore his subconscious in order to find love. But then the CD sticks, leaving him stranded in his own psyche. Fortunately, beautiful Rachel’s CD has stuck too.

How to Be a More Interesting Person. By Gary Ogin. Donald is convinced that he is too boring for his relationship with Amy to be going anywhere. When Zak, fleeing a violent argument, comes crashing into his flat, he relishes the intrusion of someone who can show him how to be more interesting. But is this a good idea?

The Legend of Sleepy Hollow. Seasonal spooky stories. Washington Irving’s chilling classic is a tale of two love rivals and a headless horseman.

Sir Gawain and the Green Knight. Translated from the medieval verse by Simon Armitage It’s Christmas festivity time and the Knights of the Round Table in Camelot are disrupted by the appearance of a green knight. The stranger has come to lay down a challenge – a test of courage and heart.

he Book of Love. By Mark Hills. Tom is only 26 and has slept with 53 women. Then he finds a mysterious book which has an odd effect on him.

The Happy Prince. Oscar Wilde’s short tale of a metal statue who becomes friends with a migratory bird. Together they bring some happiness to others in life and in death.

Not a Games Person is an illustrated, abridged version of Julie Myerson’s memoir, which spends 45 minutes immersed in the sights, sounds and smells of a school sports day in the late 1960s.